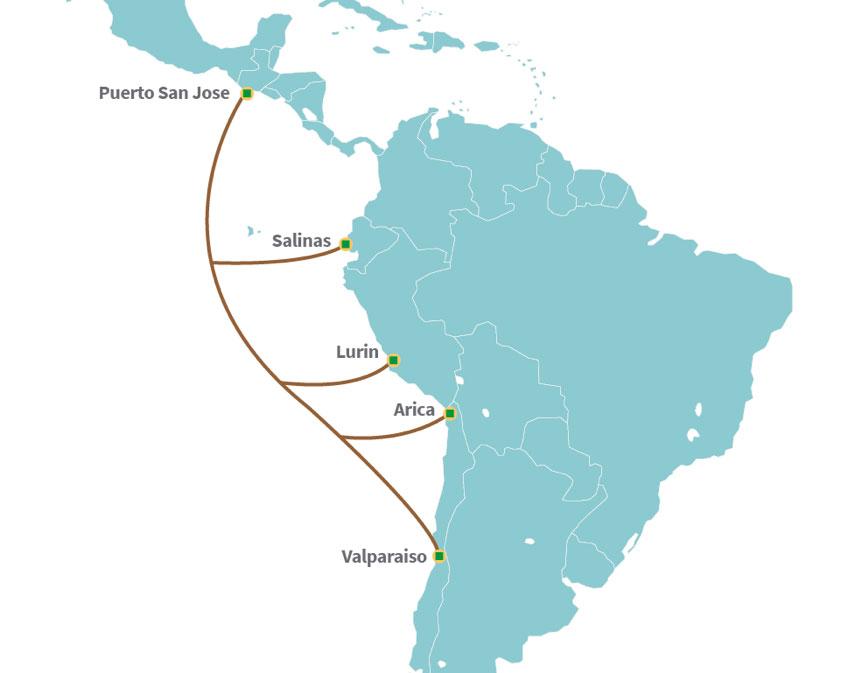 Lima, 9 March 2021. Setting a new milestone in the development of telecommunications in Peru, Claro and Telxius today announced the landing of the South Pacific Submarine Cable (SPSC) or ‘Mistral’ (which will be Telxius’ commercial name of the cable). ‘Mistral’ is a new high-capacity fiber optic submarine cable, which runs along the Latin American Pacific coast to link up Guatemala, Ecuador, Peru and Chile and which provides a direct connection with servers available in the United States.

This revolutionary project, carried out jointly by Claro and Telxius and supplied by Subcom, has required a significant investment for the deployment of approximately 7,300 kilometers of state-of-the-art  fiber optic submarine cable, which provides greater transmission capacity (72 Tbps) and redundancy to Peru. This translates into a strengthening of cloud services as well as greater protection and reliability in the traffic of national and international services. With the SPSC/Mistral, Claro and Telxius bring new submarine cable infrastructure to Peru after nearly 20 years.

The SPSC/Mistral has been designed as an infrastructure capable of evolving at the pace of technology, thus enabling the growing demand for Internet, data and content services in Peru to be met. This cable is expected to be ready for service by mid-2021 and will enable millions of Peruvians to enjoy a better connectivity experience with higher capacity, lower latency and higher availability for their internet connections. It is a project that will change the way customers connect as it can support the simultaneous transmission of 6 million images, the downloading of 1.2 million songs, the watching of 4.24 million high-definition television broadcasts or enable 1.125 million voice calls, all in one second.

Rafael Muente, President of Osiptel’s Board of Directors, said that since the pandemic began, there has been greater awareness of the need for telecommunications in users’ lives. Telecommunications have played a key role in this situation, especially because they are essential for working, studying and interacting from home through internet, mobile and fixed telephony services. In this regard, the landing of the new high-capacity Pacific Submarine Cable will be of special importance, as it will improve connectivity alternatives in the international section, which will help revitalize this market segment.

In turn, Humberto Chávez, General Manager of Claro Peru, highlighted the relevance of the deployment of this technological infrastructure in the midst of a health emergency that has increased people’s need for communication. “Today, as we face new challenges to keep the country connected, we are sure that having invested in the most efficient and reliable telecommunications infrastructure will allow us to improve our customers’ experience.  We are proud to know that this kind of initiatives boost the digital inclusion of millions of Peruvians, expanding their development opportunities thanks to access to teleworking tools, e-learning and other Internet platforms,” he said.

Thanks to the high capacity of this submarine cable, Claro’s transmission network in Peru will be strengthened, enhancing enterprise cloud services, as well as the delivery of services such as Claro TV, Claro Music and Claro 4G to more than 12.7 million customers.  The SPSC/Mistral complements the AMX-1 submarine cable, which currently links the United States to Central America, Colombia and Brazil under the waters of the Atlantic Ocean, forming a robust telecommunications network.

José Luis Díaz Ramírez, General Manager of Telxius Cable in Peru, highlighted the boost that this project will give to communications in Peru and in the Pacific coast countries of Latin America, as well as enabling us to continue offering our customers the highest levels of service, reliability and security. “With the Mistral, the first submarine cable to reach Peru since 2001, the country’s communications will be ready to handle the explosion of data traffic expected as a result of the development of new technologies such as 5G.”